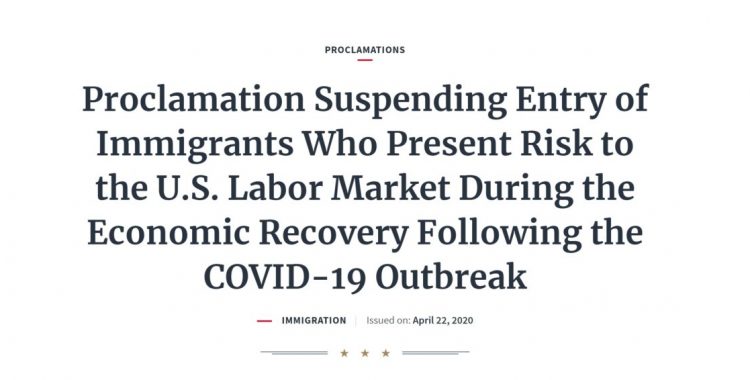 On April 22, 2020, The president’s executive order was signed that will temporarily not allow certain people to come to the U.S. for at least 60 days, but it can be extended if needed.

This applies to people who are NOT in the U.S., do not have an immigrant visa that was effective on 4/22/2020, and do not have any official travel documents other than a visa that was effective 4/22/2020. An example of this would be a person who is a green card holder and has petitioned for a spouse or child, that spouse or child will not be able to come to the U.S. during this ban. Another example would be an employer who has petitioned for a worker for a green card and the employee is currently in another country waiting for a green card.

This ban does not apply to:

-Person who needs a visa who is a physician, nurse, or other healthcare professional; to perform medical research to combat the spread of COVID-19; or to do other work that is essential to combatting the disease.

-Person applying for a visa to enter the United States pursuant to the EB-5 Immigrant Investor Program;

-Person who is the spouse of a United States citizen;

-Person who is under 21 years old and is the child of a United States citizen, or who is a prospective adoptee seeking to enter the United States pursuant to the IR-4 or IH-4 visa classifications;

-Person whose entry would further important United States law enforcement objectives, as determined by the Secretary of State, the Secretary of Homeland Security, or their respective designees, based on a recommendation of the Attorney General or his designee;

-Person seeking to enter the United States pursuant to a Special Immigrant Visa in the SI or SQ classification, subject to such conditions as the Secretary of State may impose, and any spouse and children of any such individual; or